Spring is in the air – a time for flowers, courtship and reading, encapsulated by the long-established Catalonian tradition of celebrating St George’s Day on 23 April with a celebratory festival that combines love, books and roses.

The Festival of Sant Jordi in Barcelona marks the victory over the eponymous crusading St George over the dragon, symbolised by our hero giving his rescued princess roses formed from the blood of the beast he has just slain. Patron saint of the region since 1436, booksellers in Barcelona took up the writer Vicente Clavel Andres’ idea of using St George’s Day as an opportunity to celebrate the anniversary of the death of Spain’s best-known author, Miguel de Cervantes Saavedra (on 22/23 April in the Gregorian calendar) – known to the world as Cervantes – by merging a festival around gifting books (like Cervantes’ masterpiece, Don Quixote) with the religious commemoration and the legend of courtly love and floral displays of affection. The Festival of Sant Jordi was established in Barcelona in 1923.

Former Director-General of UNESCO (1987-99), Federico Mayor Zaragoza, wanted to bring his native city’s festival to the world. In 1995, he led UNESCO’s General Conference, held in Paris that year, to pay a world-wide tribute to books and authors on this date, encouraging everyone to access books: World Book and Copyright Day was established and quickly took root around the world.

On World Book and Copyright Day 2019, current Director-General of UNESCO, Audrey Azoulay, circulated her official message to mark the occasion. She referenced UNESCO’s International Year of Indigenous Languages (in 2019) and announced the start of Sharjah’s tenure as World Book Capital 2019.

The date 23 April was auspicious: it gives the world the opportunity to celebrate the lives of many writers of global significance, including: 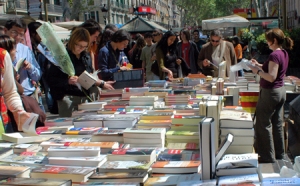 Other celebrations on the day