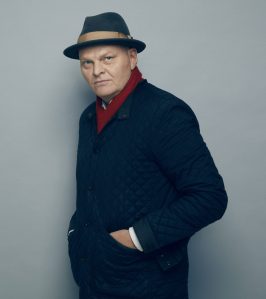 Hallgrímur Helgason is an Icelandic writer born in Reykjavík on 18 February 1959. He started his career in the arts as a painter – studying in Iceland (at the Iceland of the Arts, Reykjavík) and Germany (at the Academy of Fine Arts, Munich) – but gradually over time became a writer, broadcaster and columnist as well.

This change of direction was triggered during a period of living in New York City in the 1980s, when he broadcast a well-received weekly show for Icelandic State Radio called Radio Manhattan. The discipline of researching and writing these regular broadcasts was all the impetus he needed to start writing novels as a way of reducing the pressure he felt as a painter. His second novel Things Are Going Great, written whilst living in Paris, proved to be Hallgrímur Helgason’s breakthrough book.

Best known for The Hitman’s Guide to Housecleaning and 101 Reykjavik (which was made into an internationally acclaimed, award-winning film), his novel The Woman at 1000° was published in 2017 in the UK by Oneworld Publications and in 2018 in the US by Algonquin Books.

Hallgrímur Helgason now lives in Reykjavík with his partner and the youngest two of his three children.

Jolabokaflod, the Christmas Flood of Books, is the nicest of Icelandic traditions. It may always have existed, in one way or another, since we have been saga-nerds for a thousand years, but it acquired its current form in the Post-War Years. When people had little money and even less things to buy (not many imported goods were available), locally made books became the perfect Christmas present. Publishers went with the flow, a tradition was born, and ever since, almost all Icelandic fiction and most of the non-fiction is published in the month of November.

For the authors, it’s a bit of a horse race. You can almost hear people calling: ‘Let the games begin!’ and ‘May the best book win!’ And once it’s all over be sure to hear someone muttering: ‘The best books always get drowned in the flood.’ All this is true. It’s always a bit annoying hearing people comparing works that are totally incomparable, a crime novel and a book pf poetry, a thick historical brick of a novel and a thin avant-garde collection of short stories. But it’s also all understandable, since all those different horses are running and being run over in the Jolabokaflod season.

But with age you tend to overlook the competitive spirit of it. Nowadays, for me, it’s more like an annual Christmas party, a gathering of dear friends and colleagues, who all arrive with a new exciting companion every time; his or her latest book. It’s always so exciting to see what your colleagues have been up to, and you meet them at readings, listen to each other, sit with them in planes and buses, touring the suburbs or the countryside, and afterwards you all go together for drinks.

Excitement then builds up for 1 December, when the short-lists for the Icelandic Literary Prize are announced: Five works are nominated in four different categories: adult fiction, children’s literature, non-fiction and translated fiction. (The winners will be announced in February.) Some authors will be happy, others angry, and yet others will use their frustration wisely. Still, everybody will try to keep their cool, which we manage to do most of the time, until the that beer no. 5 takes over. In general, we have a good spirit among Icelandic writers, with the occasional awkward silence. Iceland is a small country and arrogance is almost impossible. (Not many Dylans up here.)

For writers, Jolabokaflod is crucial in terms of sales. Without it we would all be selling our souls down at the advertising agency, or feeling rather marginalised. Jolabokaflod makes sure the Icelandic book business is a real industry. It can even make you rich, that is, if you are a publisher or a crime novelist. But most of all it keeps literature at the heart of the Icelandic nation: I always have to remind myself to thank Jolabokaflod when I see a new novel of a friend being blasted on TV and the internet, right next to the latest Hollywood blockbusters, only lacking that deep trailer voice: ‘From the author of X comes another symbolically laden, yet minimalistically executed and quite post-modernly surrealist collection of short stories!’

Thanks to Jolabokaflod, books still matter in Iceland, they get read and talked about. Excitement fills the air. Every reading is crowded, every print-run is sold. Being a writer in Iceland you get rewarded all the time: People really do read our books, and they have opinions, they love them or they hate them. At the average Christmas party people push politics and the Kardashians aside and discuss literature. ‘His last book was so boring, but this one’s just great!’

As a painter, Hallgrímur Helgason has held over 30 exhibitions.

His best known books have been translated into many languages: 101 Reykjavik (16 languages), The Hitman’s Guide to House Cleaning (15 languages) and The Thousand Degree Woman (12 languages).