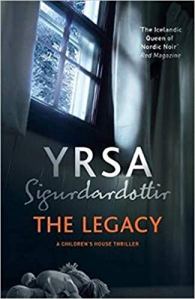 The murder was meant as a punishment – but what sin could justify the method?

The only person who might have answers is the victim’s seven-year-old daughter, found hiding in the room where her mother died. And she’s not talking.

Newly promoted, out of his depth, detective Huldar turns to Freyja and the Children’s House for their expertise with traumatised young people. Freyja, who distrusts the police in general and Huldar in particular, isn’t best pleased. But she’s determined to keep little Margret safe.

It may prove tricky. The killer is leaving them strange clues: warnings in text messages, sums scribbled on bits of paper, numbers broadcast on the radio. He’s telling a dark and secret story – but how can they crack the code? And if they do, will they be next?

‘Few readers will be able to put down this powerful tale of revenge.’ Publishers Weekly

‘Don’t expect to get much done when you start this book. It’s nearly impossible to put down. It’s my first by this author, but it certainly won’t be my last. Spectacular!’ Criminal Element

‘The Legacy takes us into a world where secrets are buried deep, only to reappear decades later and inflict harm on people who have no idea that they’re connected by past horrors. Yrsa is a magnificent writer who envelops her stories with atmosphere so thick that only care and a bit of luck can see through it. Her characters spring vividly to life as they try their best to do just that, knowing that any mistake could be deadly for another innocent person. Impossible to put down.’ Karin Slaughter, author

‘The Legacy is the start of an exciting new direction for Yrsa Sigurðardóttir. The horror of a decades-old family separation provides the catalyst for dark crimes and a complex investigation. The Children’s House promises to be an outstanding series.’ Sarah Ward, author

‘We have always been able to rely on Yrsa Sigurðardóttir for a good story well told, and The Legacy is no exception. A strong sense of place, interesting characters and a chilling plot make The Legacy a novel to savour.’ Peter Robinson, author

‘There may be several pretenders to her crown, but Yrsa Sigurðardóttir remains the queen of Icelandic thriller writers – and anyone curious as to why simply needs to pick up The Legacy, which is closer in feeling to the macabre work of Stephen King than to most Nordic noir.’ The Guardian

‘If you like your crime fiction dark and engaging, look no further. The Legacy is as brutal as it gets. A cracking start to a new series by Yrsa Sigurðardóttir.’ Mari Hannah, author

‘Another tour de force from Sigurðardóttir that cements her reputation as the queen of Nordic noir.’ Irish Examiner

‘The conclusion is even more astounding, thanks to her white-hot plotting.’ Crime Fiction Lover

‘The connecting thread in all the writer’s work is her astuteness in observing human relations, the everyday mixed with the dark and devious.’ theArtsDesk.com

‘Yrsa Sigurðardóttir is far from your typical Nordic Noir author, and The Legacy proves yet again how she is reshaping the crime fiction subgenre and making it her own.’ Crime by the Book

‘Every one of Yrsa Sigurdardóttir’s books has been outstanding, and The Legacy is no exception.’ Marilyn’s Mystery Reads