As well as being a prize-winning, bestselling novelist, Siri Hustvedt is widely regarded as a leading thinker in the fields of neurology, feminism, art criticism and philosophy. She believes passionately that art and science are too often kept separate and that conversations across disciplines are vital to increasing our knowledge of the human mind and body, how they connect and how we think, feel and see.

The essays in this volume – all written between 2011 and 2015 – are in three parts. A Woman Looking at Men Looking at Women brings together penetrating pieces on particular artists and writers such as Picasso, Kiefer and Susan Sontag as well as essays investigating the biases that affect how we judge art, literature, and the world in general. The Delusions of Certainty is an essay about the mind/body problem, showing how this age-old philosophical puzzle has shaped contemporary debates on many subjects and how every discipline is coloured by what lies beyond argument-desire, belief, and the imagination. The essays in the final section, What Are We? Lectures on the Human Condition, tackle such elusive neurological disorders as synesthesia and hysteria. Drawing on research in sociology, neurobiology, history, genetics, statistics, psychology and psychiatry, this section also contains a profound consideration of suicide and a towering reconsideration of Kierkegaard. Together they form an extremely stimulating, thoughtful, wide-ranging exploration of some of the fundamental questions about human beings and the human condition, delivered with Siri Hustvedt’s customary lucidity, vivacity and infectiously questioning intelligence.

Available in the UK via ‘My Local Bookshop‘ search engine or Amazon (A Woman Looking at Men Looking at Women: Essays on Art, Sex, and the Mind

)
Available in the USA via Amazon (A Woman Looking at Men Looking at Women: Essays on Art, Sex, and the Mind

1888 Dutch painter Vincent van Gogh cuts off his left ear with a razor, and sends it to a prostitute for safe keeping.

Handball is the national sport in Iceland and is popular in other Nordic countries as well. When the president of Iceland spoke to the media after the national men’s team won a silver medal at the  Beijing Olympic Games in 2008, he explained how important the sport is to the country.

Everyone in the Iceland knows the names of the national team’s players and the overall success of the team is considered very important.

Handball has been described as a version of soccer where players use their hands. It is a fast-paced and brutal game; scores are generally higher than soccer and violent play is often within the rules. 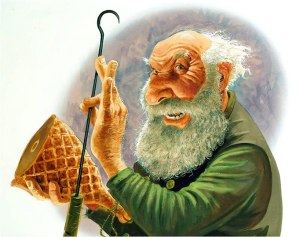 In Iceland, the twelfth of the 13 Yule Lads arrives at every home this evening. Tonight, Ketkrókur (Meat Hook) will come, carrying a long stick with a hook at the end to poke down chimneys to steal any meat he can reach, preferably hangikjöt (smoked lamb).

A Yule log is an enormous log that is typically burned during the Twelve Days of Christmas (25 December 25-6 January).

Some scholars suggest that the word yule means ‘revolution’ or ‘wheel’, with reference to the cyclical return of the sun.

A burning log or its charred remains is said to offer health, fertility, and luck as well as the ability to ward off evil spirits.

The first printed books didn’t display the name of the author or even the title on the cover. The covers were artworks itself, often of embossed leather, comprising drawings and or often gold leaf.

This tradition continues in the work of artists who work in the medium of book art and altered books.

Italo Calvino, If on a Winter’s Night a Traveller, sections in the bookstore

David Baldacci, The Camel Club: ‘Why can’t people just sit and read books and be nice to each other?’