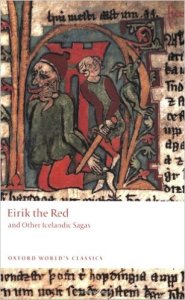 Eirik the Red is a saga about the Norse exploration of North America. The saga chronicles the events that led to Eirik the Red’s banishment to Greenland, as well as Leif Ericson’s discovery of Vinland after his longship was blown off course. By the geographical details given in the saga, this place is thought to be present-day Newfoundland, and so was probably the first European discovery of the American mainland, some five centuries before Christopher Columbus’s voyage to Central America.

The saga is preserved in the original in two manuscripts that depict different versions: Hauksbók and Skálholtsbók. Modern philologists believe the Skálholtsbók version to be truer to the original. The original saga is thought to have been written in the thirteenth century.

This version of the saga is edited and translated by Gwyn Jones, whose ‘English has a yeasty Welshness in it that corresponds quite nicely to the idiomatic springiness of the original’ according to L Michael Bell, Professor Emeritus of English at the University of Colorado.