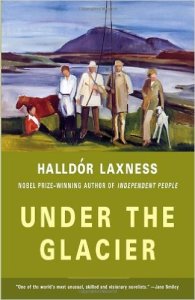 Nobel laureate Halldór Laxness’s Under the Glacier is a one-of-a-kind masterpiece, a wryly provocative novel at once earthy and otherworldly.

At its outset, the Bishop of Iceland dispatches a young emissary to investigate certain charges against the pastor at Snæfell Glacier, who, among other things, appears to have given up burying the dead. But once he arrives, the emissary finds that this dereliction counts only as a mild eccentricity in a community that regards itself as the center of the world and where Creation itself is a work in progress.

What is the emissary to make, for example, of the boarded-up church? What about the mysterious building that has sprung up alongside it? Or the fact that Pastor Primus spends most of his time shoeing horses? Or that his wife, Ua (pronounced ‘ooh-a’, which is what men invariably sputter upon seeing her), is rumoured never to have bathed, eaten, or slept?

Piling improbability on top of improbability, Under the Glacier overflows with comedy both wild and deadpan as it conjures a phantasmagoria as beguiling as it is profound.

‘Science fiction. Table, fable, allegory. Philosophical novel. Dream novel. Visionary novel. Literature of fantasy. Wisdom lit. Spoof. Sexual turn-on. Convention dictates that we slot many of the last centuries’ perdurable literary achievements into one or another of these categories. The only novel I know that fits into all of them is Halldór Laxness’s wildly original, morose, uproarious Under the Glacier.’ Susan Sontag, The New York Times

‘Under the Glacier is a marvelous novel about the most ambitious questions.’ Susan Sontag, The New York Times

‘Such is the wondrous strangeness of this book: At its most ironic it is also most devout, in its darkest hour it is most illuminating.’ Andrew O’Hehir, Salon

‘This [is an] impishly chaotic novel’ Kirkus Reviews

‘Laxness’s novel is more of a sophisticated philosophical farce. At times, this comic fable is so full of dry humour that it leaves you laughing helplessly.’ The Arts Fuse