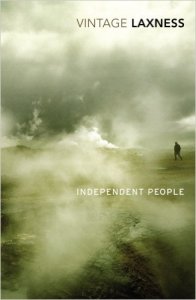 First published in 1946, this humane epic novel is set in rural Iceland in the early twentieth century.

Bjartus is a sheep farmer determined to eke a living from a blighted patch of land. Nothing, not merciless weather, nor his family will come between him and his goal of financial independence. Only Asta Solillja, the child he brings up as his daughter, can pierce his stubborn heart. As she grows up, keen to make her own way in the world, Bjartus’ obstinacy threatens to estrange them forever.

‘I love this book. It is an unfolding wonder of artistic vision and skill – one of the best books of the 20th century. I can’t imagine any greater delight than coming to Independent People for the first time. Jane Smiley, author

‘Laxness is a poet who writes to the edge of the pages, a visionary who allows a plot: he takes a Tolstoyan overview, he weaves in an Evelyn Waugh-like humour: It is not possible to be unimpressed.’ Daily Telegraph

‘Marvellously fluent and unaffected … one of the most original and skilfully written novels of the twentieth century.’ The Times Literary Supplement

‘Do yourself a favour and read Independent People. Opening this book is like opening a chest of treasures. Reading this book is like taking the treasures out and appreciating them, savouring them, one by one, sentence by sentence. This is the kind of novel that reminds you how glad you are that you learned to read in the first place.’ Chicago Tribune