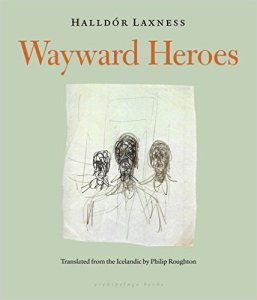 Published in the USA by Archipelago Books.

First published in 1952, Wayward Heroes (also known in an earlier translation as The Happy Warriors) is part of the body of works for which Halldór Laxness was awarded the Nobel Prize in 1955.

It is a masterfully written tragicomedy about the oath-brothers Thorgeir and Thormod, inspired by the old Icelandic sagas ‘Saga of the Sworn Brothers’ and ‘Saga of Saint Olaf’.

The brothers fight for glory, raid for treasure, and seduce women against the backdrop of a new cult of Christianity. But whereas the old sagas depict their heroes as glorious champions, Laxness does the opposite. As Thormod avenges Thorgeir’s death, he demonstrates the senselessness of violence and the endlessly cyclical nature of obsession.

‘Laxness is a beacon in twentieth-century literature, a writer of splendid originality, wit, and feeling.’ Alice Munro, author

‘Laxness brought the Icelandic novel out from the sagas’ shadow … to read Laxness is also to understand why he haunts Iceland – he writes the unearthly prose of a poet cased in the perfection of a shell of plot, wit, and clarity.’ Julian Evans, The Guardian

‘The qualities of the sagas pervade his writing, and particularly a kind of humour -boblique, stylized and childlike – that can be found in no other contemporary writer.’ The Atlantic Monthly

‘Laxness habitually combines the magical and the mundane, writing with grace and a quiet humor that takes awhile to notice but, once detected, feels ever present … All his narratives … have a strange and mesmerizing power, moving almost imperceptibly at first, then with glacial force.’ Los Angeles Times

‘One of the world’s most unusual, skilled and visionary novelists.’ Jane Smiley

‘One quality that makes Laxness’s novels so morally uplifting is their air of tender but urgent gratitude. While his tone can vary widely from book to book … the reader consistently feels that the books are conceived in a spirit of homage; they are some of the world’s most substantial thank-you notes.’ Brad Leithauser, The New York Review of Books