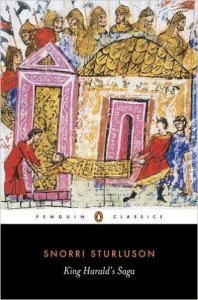 This compelling Icelandic history describes the life of King Harald Hardradi, from his battles across Europe and Russia to his final assault on England in 1066, less than three weeks before the invasion of William the Conqueror. It was a battle that led to his death and marked the end of an era in which Europe had been dominated by the threat of Scandinavian forces. Despite England’s triumph, it also played a crucial part in fatally weakening the English army immediately prior to the Norman Conquest, changing the course of history.

Taken from the Heimskringla – Snorri Sturluson’s complete account of Norway from prehistoric times to 1177 – this is a brilliantly human depiction of the turbulent life and savage death of the last great Norse warrior-king.

Heimskringla itself is a collection of sagas about the Norwegian kings, beginning with the saga of the legendary Swedish dynasty of the Ynglings, followed by accounts of historical Norwegian rulers from Harald Fairhair of the 9th century up to the death of the pretender Eystein Meyla in 1177.

The exact sources of his work are disputed, but included earlier kings’ sagas, such as Morkinskinna, Fagrskinna and the twelfth-century Norwegian synoptic histories and oral traditions, notably many skaldic poems. Snorri Sturluson had himself visited Norway and Sweden. For events of the mid-12th century, Snorri explicitly names the now lost work Hryggjarstykki as his source. The composition of the sagas is Snorri’s.