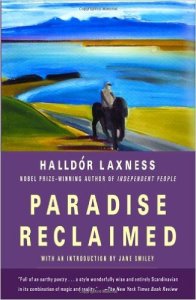 An idealistic Icelandic farmer journeys to Mormon Utah and back in search of paradise in this captivating novel by Nobel Prize winner, Halldór Laxness.

The quixotic hero of this long-lost classic is Steinar of Hlidar, a generous but very poor man who lives peacefully on a tiny farm in nineteenth-century Iceland with his wife and two adoring young children. But when he impulsively offers his children’s beloved pure-white pony to the visiting King of Denmark, he sets in motion a chain of disastrous events that leaves his family in ruins and himself at the other end of the earth, optimistically building a home for them among the devout polygamists in the Promised Land of Utah.

By the time the broken family is reunited, Laxness has spun his trademark blend of compassion and comically brutal satire into a moving and spellbinding enchantment, composed equally of elements of fable and folkore and of the most humble truths.

‘Full of an earthy poetry … a style wonderfully wise and entirely Scandinavian in its combination of magic and reality.’ The New York Times Book Review

‘The qualities of the sagas pervade his writing, and particularly a kind of humour – oblique, stylised and childlike – that can be found in no other contemporary writer.’ Atlantic Monthly