For Sam Faiers life as part of the The Only Way Is Essex cast, living it up and partying the night away, is a distant memory but she wouldn’t change it for the world. Since becoming a mum to Paul Jnr her life has taken a magical turn although at times it can be just as tiring and worrying too.

Now Sam invites her fans, fellow mums or mums-to-be to join her on an unforgettable journey through motherhood. Charting the highs and lows, she opens up about what being a mum is really like – from those treasured first cuddles and baby’s first smile to dealing with leaking nappies and getting your body back in shape. Told in her no-nonsense, down-to-earth way Sam reveals that while having a baby is the best thing that has ever happened to her, caring for something so small is tough and the pressures put upon modern-day mums can be even tougher.

)
Available in the USA via Amazon (My Baby & Me

1849 The execution by firing squad of Russian writer Fyodor Dostoevsky is called off at the last second. This was not a show of mercy by Tsar Nicholas I, but rather a staged way of fostering fear, terror, and gratitude: a ‘mock execution’.

During the summer months June and July, Iceland has days with a full 24 hours of sunlight. Whilst there are myriad ways of spending 24 hours of light in a day, many people in Iceland see this as a golden opportunity to improve their golf.

Although the weather can be unpredictable, this does not put off the golfers. People describe the experience of playing golf during the Icelandic midnight sun as surreal and sublime. Golfers may not have to deal with hazards like trees on a typical Icelandic golf course, they may have other challenges – such as negotiating lava beds and birds that have had their nests disturbed. 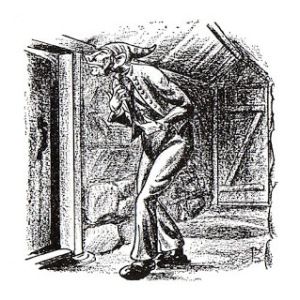 In Iceland, the eleventh of the 13 Yule Lads turns up at every home this evening. Tonight, Gáttaþefur (Door Sniffer) will use his huge nose to detect the smell of laufabrauð, a special seasonal fried bread that he loves to eat. Will he sniffs out bread and cakes that you have baked for Christmas before you realise that he has paid your home a visit?

No one in Britain was allowed by law to celebrate Christmas during the republican period after the English Civil War. Parliament decreed that it was immoral and a criminal offence to celebrate the holiest day of the year. Puritans believed that Sundays were the only days in the calendar that could be treated as special.

Woody Allen: ‘I took a speed-reading course and read War and Peace in 20 minutes. It involves Russia.’

Thea Dorn: ‘Take a good book to bed with you – books do not snore.’